Ever since we got back from Italy, I’ve been dying to try making my own pasta. So I finally did it! It ended up requiring a little more effort than I expected, but it was well worth the time spent.

Look at that delicious pile of homemade pasta! I wanted to recreate the meal Lauren made for us, so the pasta was adorned with a pesto sauce and ground sausage, just like our home cooked meal in Firenze. 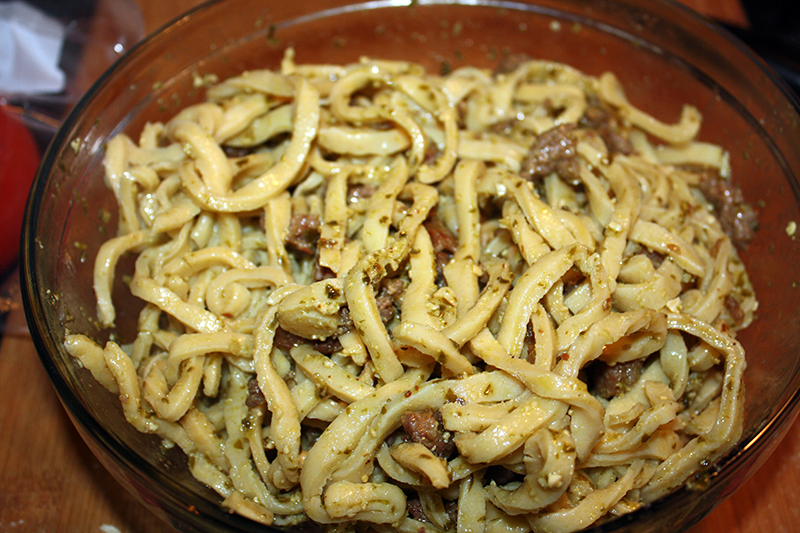 To start, you’ll mix together flour, eggs, oil, and salt, then knead until it forms a soft, elastic ball. I found that the dough was a little too dry at first, so I wet my hands with water 3 or 4 times to help moisten and bring together the dough. After the ingredients are well mixed, move the dough to a floured surface and use the palm of your hands to work the dough.

This was definitely the most rigorous part of the pasta-making, and it took longer than I expected (between 10-15 minutes). Don’t give up at this point; eventually the dough will come together into a nice ball like the photo below. I found that I needed to climb up on a step stool to get enough leverage from my body weight to knead the dough. 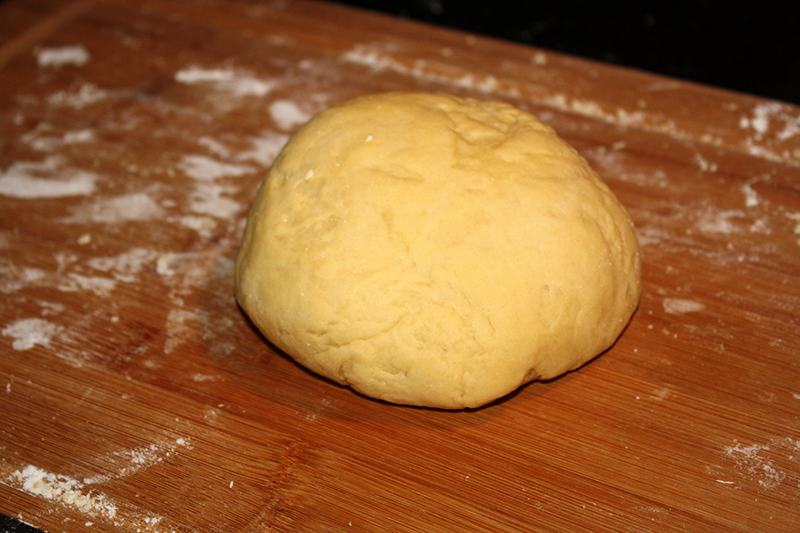 Section the pasta dough into thirds, and roll each hunk out as flat as possible with a rolling pin. Mine ended up being about 1/8″ thick, but I actually wish I’d made them a little thinner (the pasta thickens a bit when it cooks). The dough also has a tendency to recoil back as you roll it out, so just be patient and keep rolling as thin as possible. Again, I found it helpful to climb up on a stool so I had better leverage with the rolling pin. 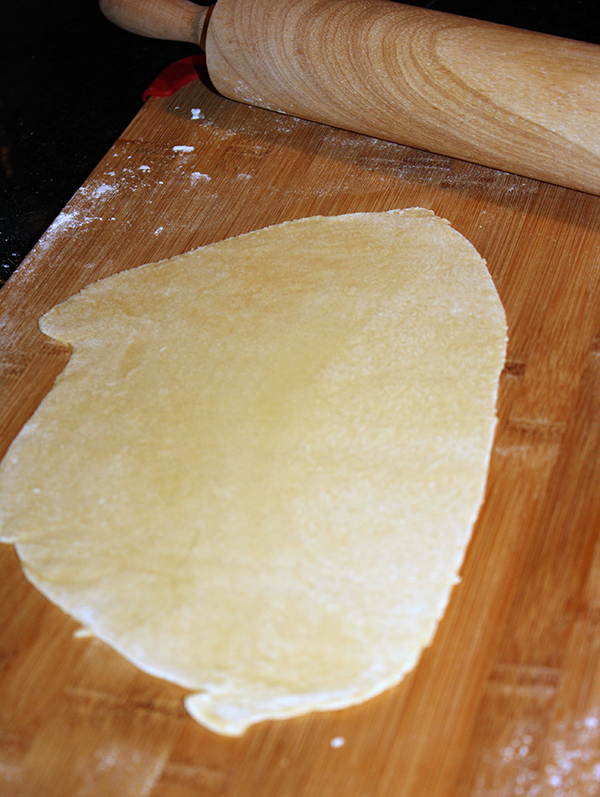 Lightly sprinkle the dough with flour before rolling the flattened dough into a wrap: 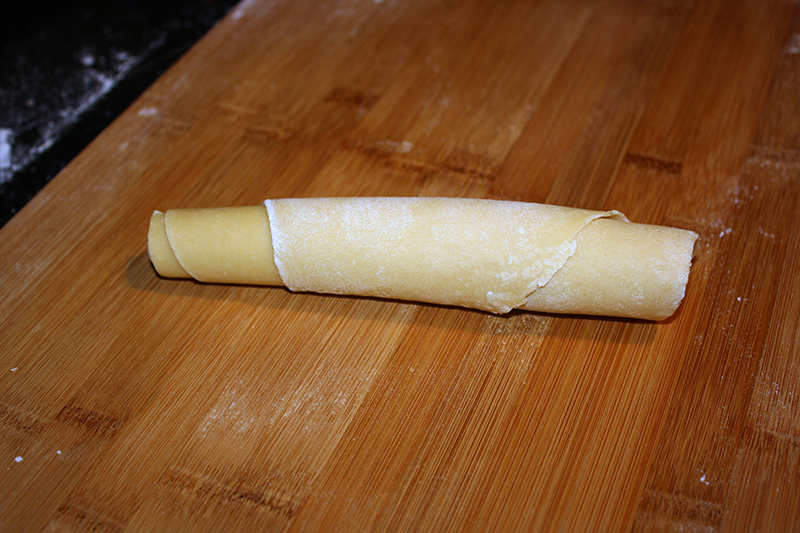 Then slice your pasta wrap into the desired width. I was wanting spaghetti noodles with mine, but they ended up being a little thicker than that. 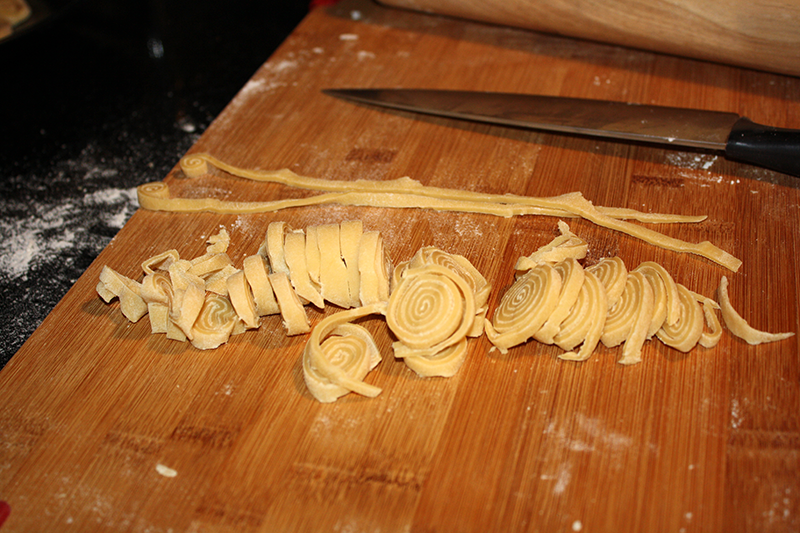 Unroll the cut pasta spirals into long, flat strands to prepare for cooking. 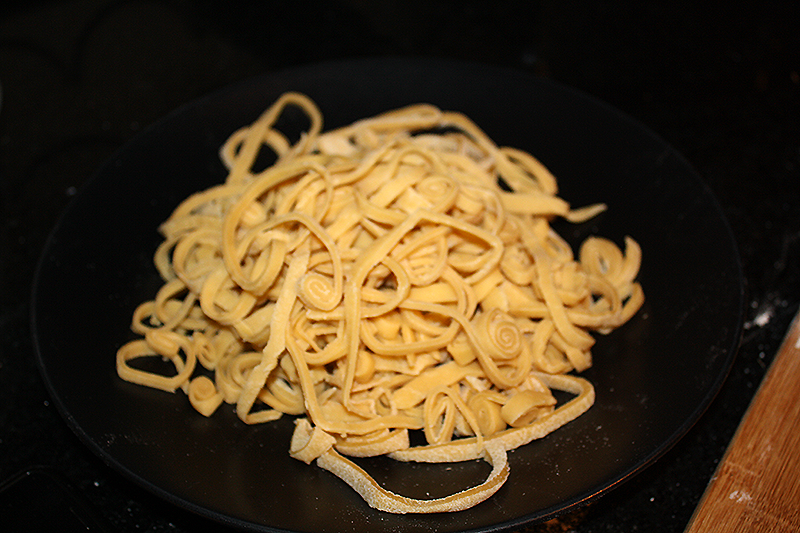 Boil water in a large pot with salt. After the water begins to boil, drop in the uncooked pasta. I ended up doing two separate batches because I had too much pasta for just one pot. Cook for 1-2 minutes, or until the pasta floats to the surface of the water. 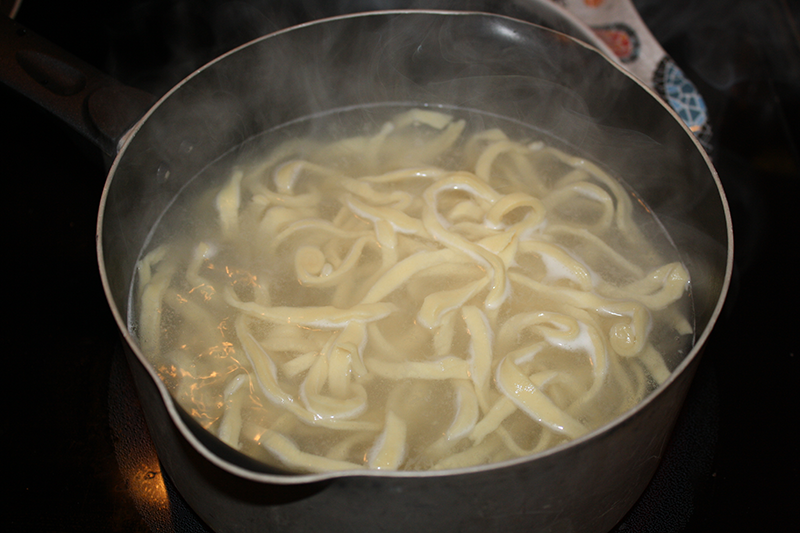 In the meantime, I also prepared some ground sausage. Remove the casings from two sausages (about 8 oz), add to a pan over medium heat, and season with salt and pepper (I also added some red pepper flakes). With a spatula, crumble the meat into small pieces as it cooks; continue to cook until the meat is browned and no longer pink. 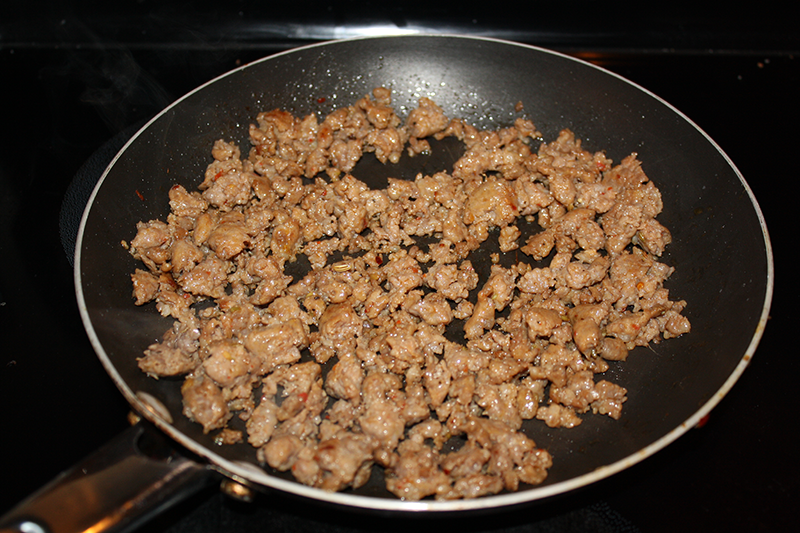 After the meat is done, add it to the bowl with the pasta, and mix well.

I served our pasta alongside a romaine salad with cherry tomatoes, olive oil, and a balsamic glaze. Perfection! 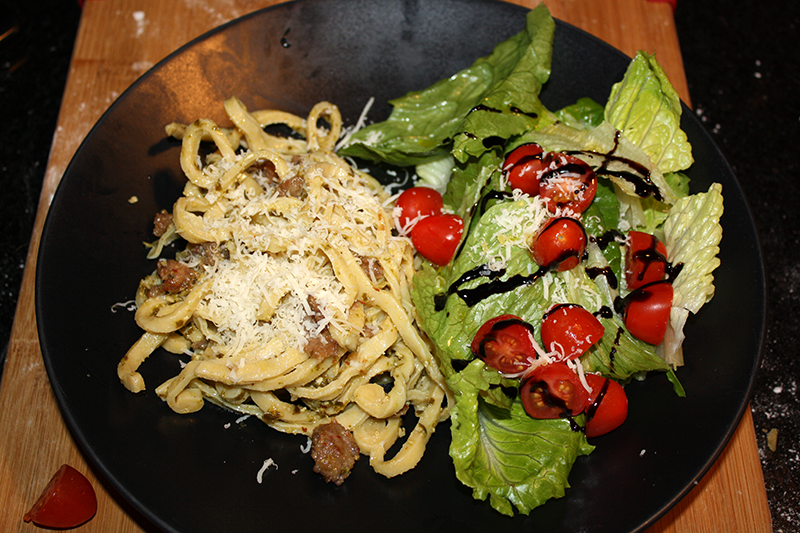 I typically like to make meals that are quick and straightforward, but since this required a little more effort and time to make than my usual, I wanted to really enjoy the meal. :)

We started out dinner with an appetizer of mozzarella, tomato, olive oil, balsamic glaze (hey, TJ’s!), and salt on ciabatta bread. 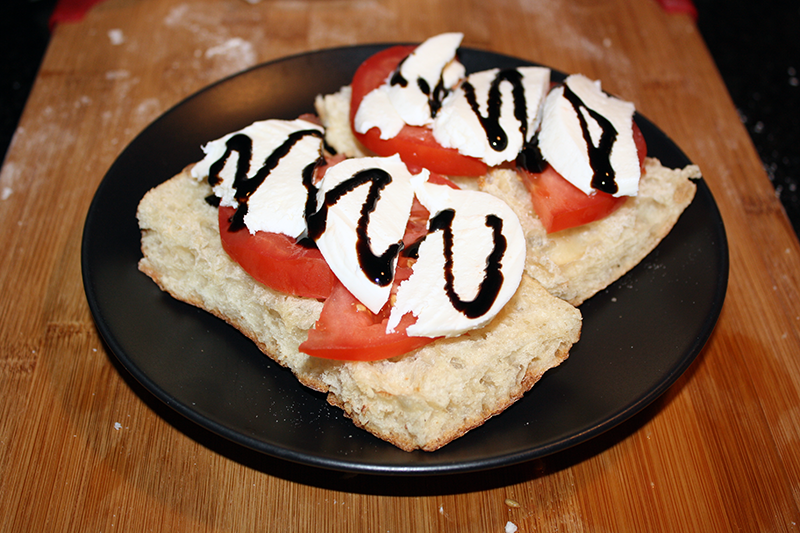 And wine of course. This Chianti is another new-found Trader Joe’s favorite. I typically go for TJ’s wines that fall in the ~$5 range, but for this I’m willing to splurge the $12. 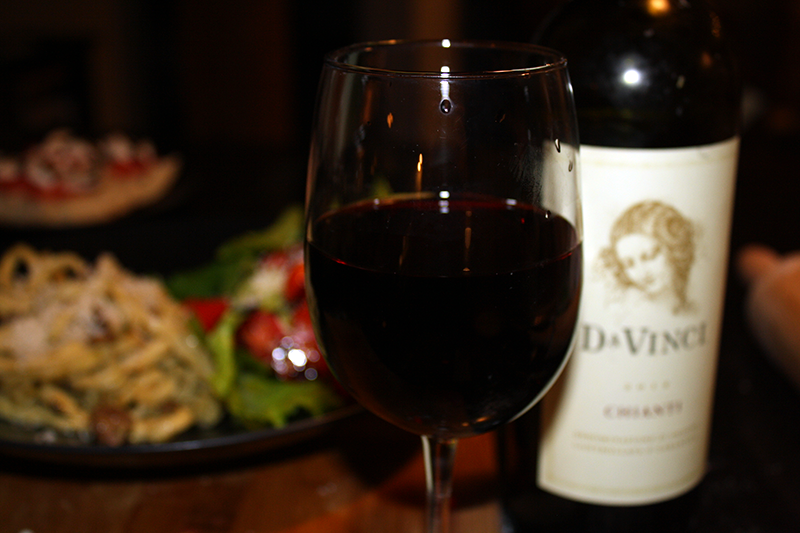 Just because reminiscing about our trip to Italy wouldn’t be complete without a puzzle, we worked on the newest addition to our collection while we munched on our appetizer. We’ve got the outer edges complete and are slowly filling in the inside! 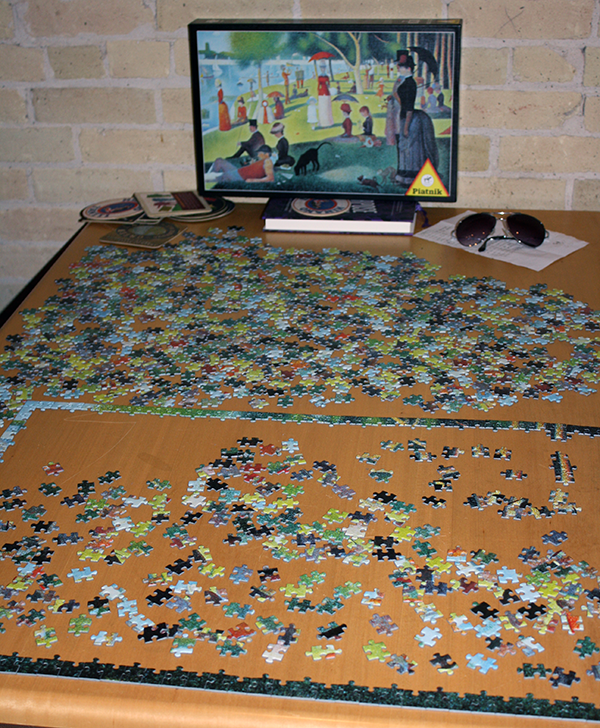 Noodles with Pesto and Sausage:

2 Responses to “Homemade Pasta with Sausage and Pesto”