Catch up on the first days of our trip in Barcelona: Part 1.

The third full day of our trip was a Sunday. After the late night at Cal Brut the day before (and all those gin and lemonades), we were a little slow getting started that morning. After a late lunch at an outdoor cafe on the beach, Aaron and I headed to catch a train to Parc de Montjuïc, which is a park set on a (monster of a) hill overlooking the city. 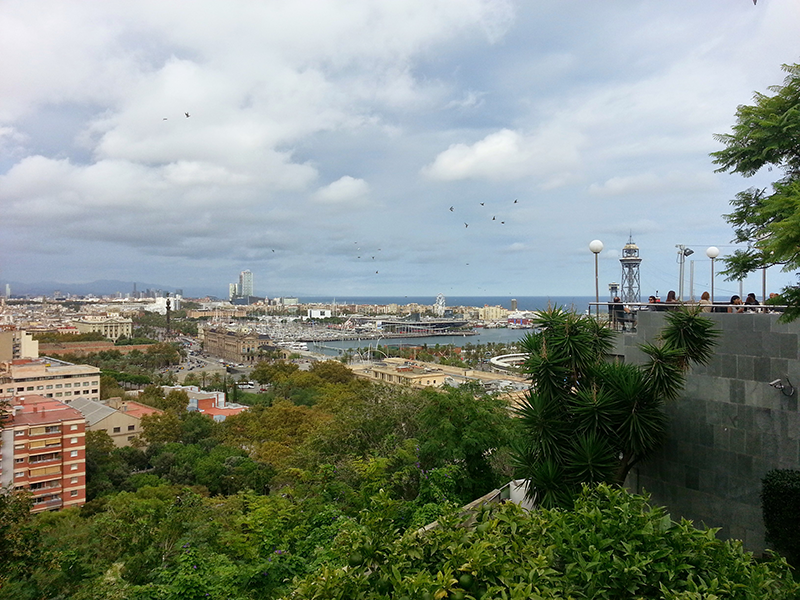 Also, how fun is this sidewalk marker? Madison is a very bike-friendly city, and it was cool to see that Barcelona values alternate forms of transportation too! 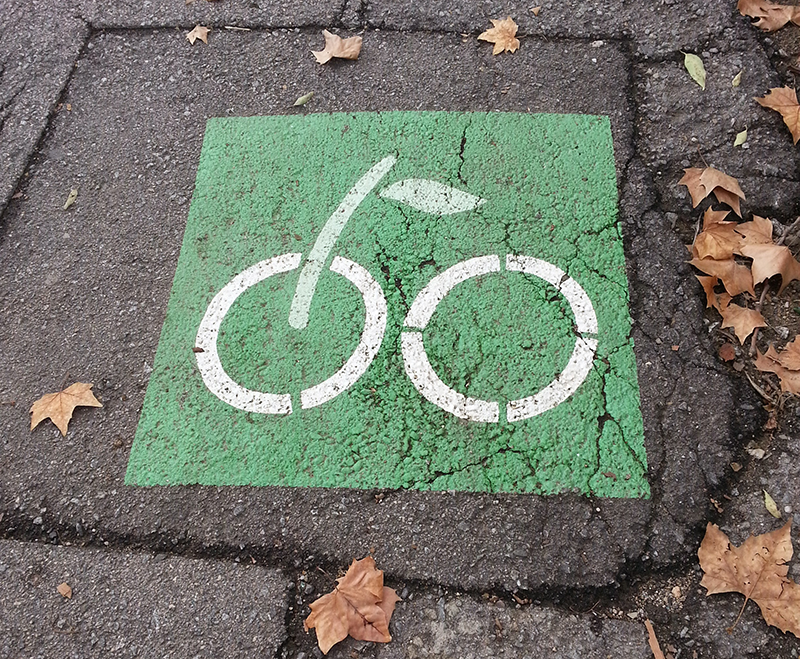 Montjuïc is home to a former Olympic site and a castle, among many other beautiful gardens. After a very steep climb to the top (they do have a gondola for those who don’t want to walk, but the price didn’t seem worth it. Plus who doesn’t love a great bun burner?), we spent some time wandering around the Castell de Montjuïc, an old military fortress that dates back to the 1600s. 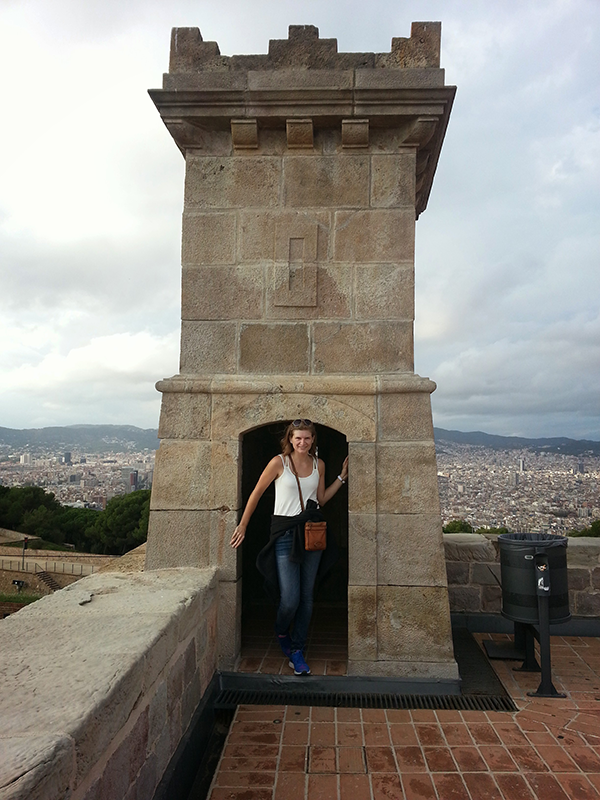 The garden area outside the fortress (which seems like it might originally have been a moat?) was beautiful. 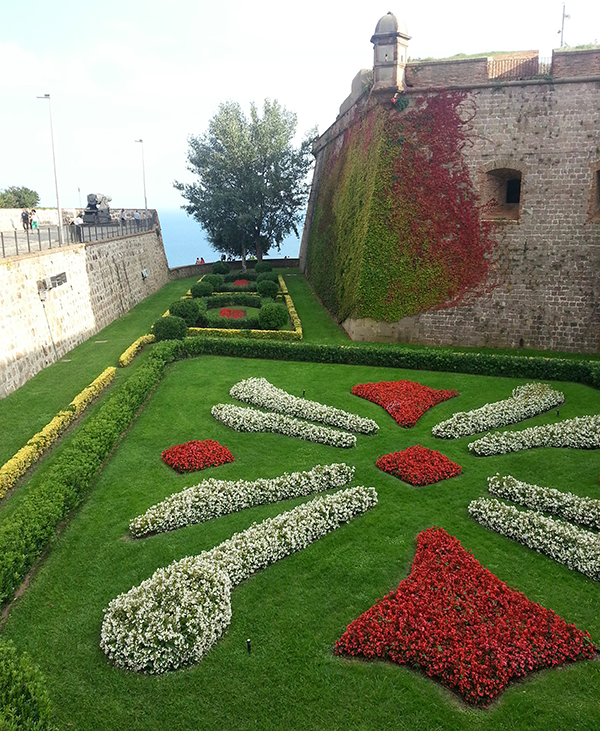 After exploring Montjuïc, it was off to my first live fútbol game! Aaron was determined to see a game while we were there (and I was happy to go along for the ride). Unfortunately Barcelona wasn’t playing that weekend, but Espanyol did have a home game. Luckily at this point we were pretty much Metro pros, so we hopped on another train or two to a stop near the stadium and then followed the crowd the rest of the twenty minutes walk to the field.

We got awesome seats! We were right at field level and Espanyol scored their first goal scored within the first 10 minutes of the game. 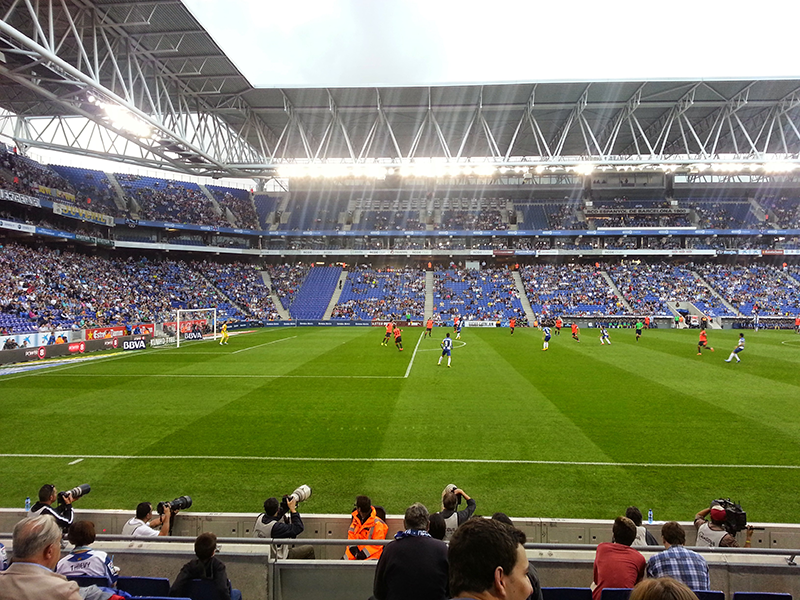 They ended up winning 2-0, with their second goal in stoppage time around 93:00. Yay for the home team! 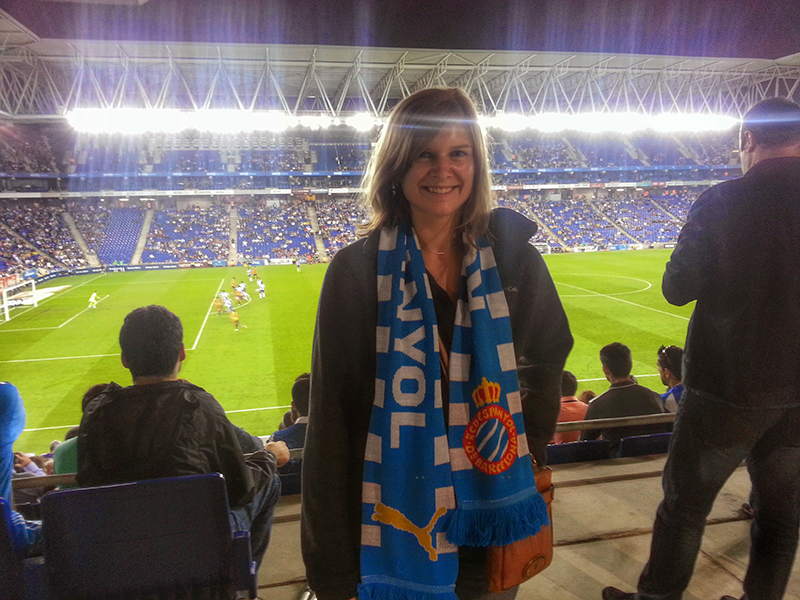 The whole experience was so fun. It was awesome being right in the middle of the action, sitting with the locals supporting their team. The best part was watching everyone holding up their scarves (I got one too!) as they cheered on the home team. Makes me wish fútbol had more of a following in the US!

After the game we headed back towards our neighborhood in Barceloneta, where we stopped into a pizza restaurant a couple blocks away. I ordered the margherita: tomato sauce, mozzarella, olive oil, basil, and parmesan. This may have been the best pizza I’d ever had! I love how flaky and light the crust was, plus the toppings could not be beat. I am determined to figure out some way to recreate this at home. If only I had a super hot oven to cook my pizzas in!

On Monday (which was our last day in Barcelona), we headed back to Sagrada Familia (the unfinished church designed by Gaudí). Still in progress, they’re scheduled to complete the building in 2030. The picture on the left is the current structure, and on the right is the original design. 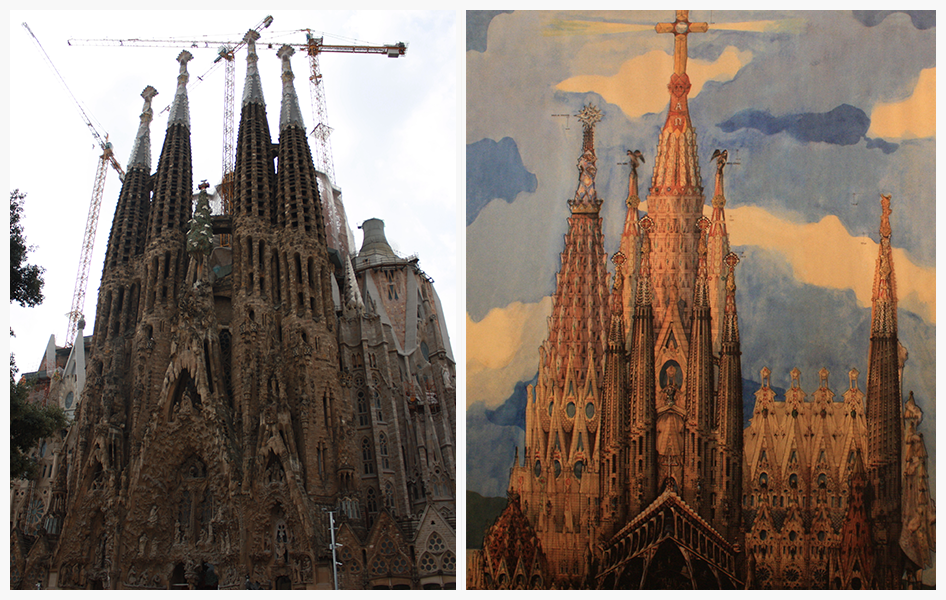 The beauty of this building cannot even be described in words. 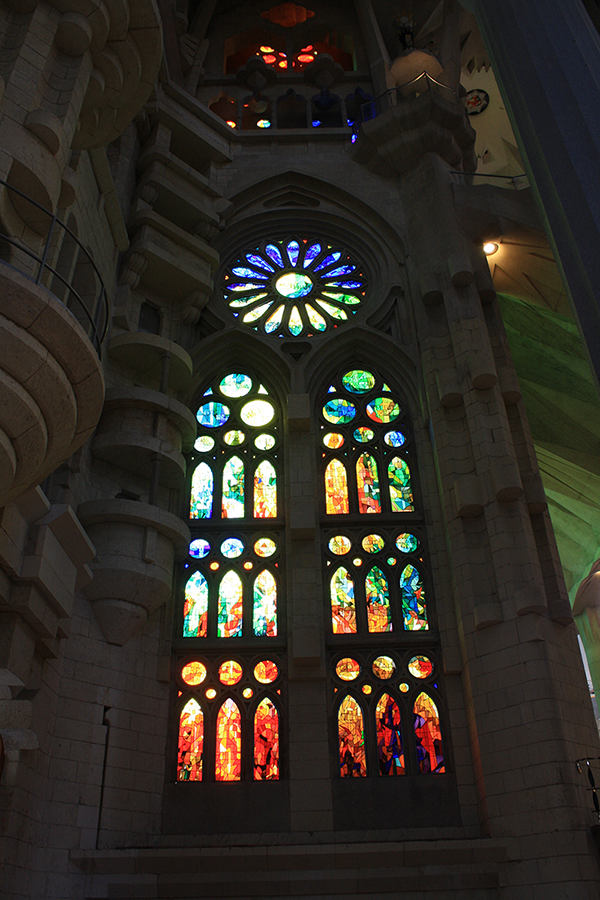 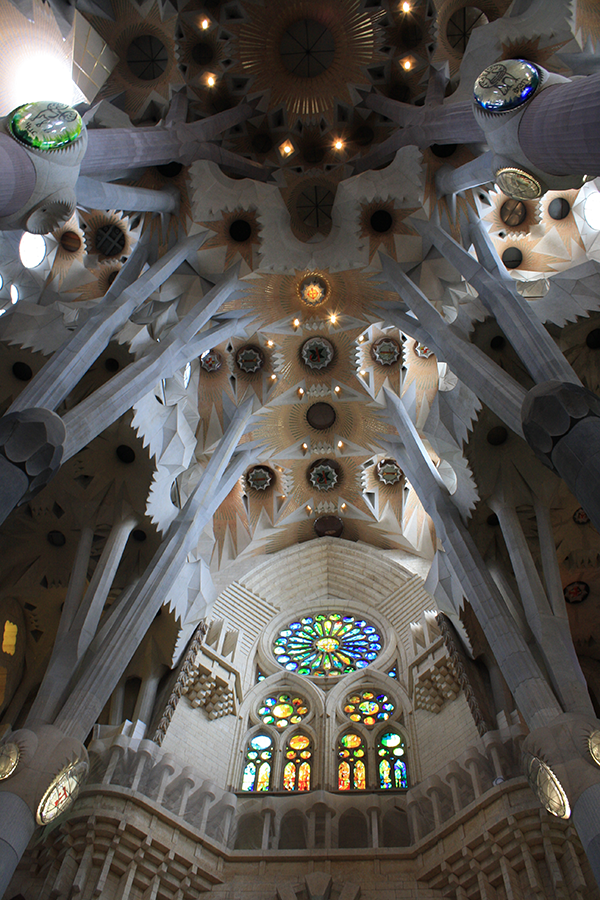 The stained glass was even more breathtaking in person as it is in these pictures. All Gaudí, all the time. 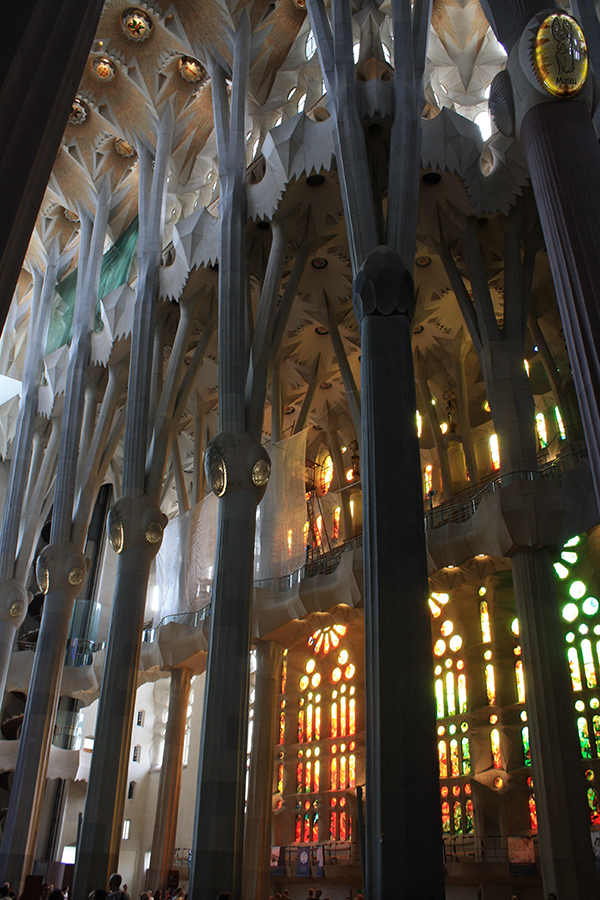 After wandering around the interior of the church for about an hour, we took an elevator up into one of the towers. The view from the top was incredible. 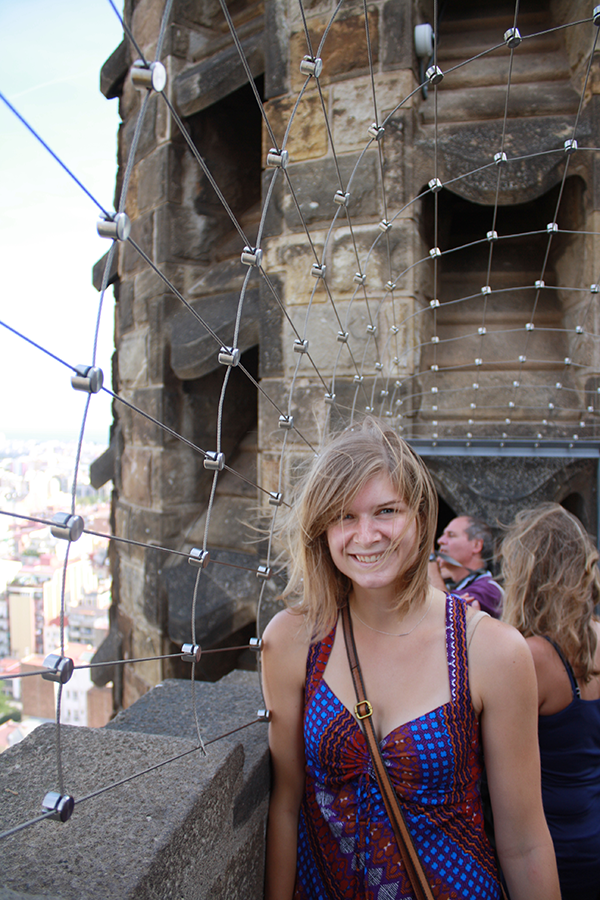 The Sagrada Familia is in a really pretty area of the city, so after we descended the tower, we started wandering west of the church.

Small, frequent meals are a norm in Spain, so we made a pit stop at a random cafe along the way for a round of sangria and munchies. 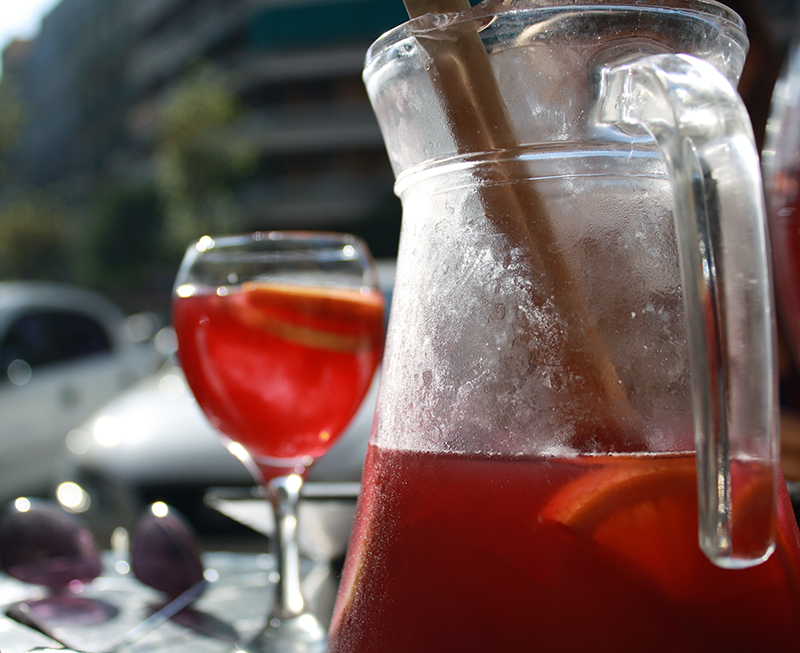 We headed back to our apartment after snacks to rest up a bit before dinner. We decided to try Ocaña, a restaurant within walking distance of home, in the Gothic Quarter.

Quick stop at Las Fritas for noms on the way. I’d been eyeing up this place the whole time we’d been in Barcelona, and couldn’t leave without getting my own healthy serving of fries. They offered a ton of topping options (bacon, fried eggs, ketchup, etc), but I opted for just the special “Las Fritas” sauce (basically a seasoned mayo). So worth it! 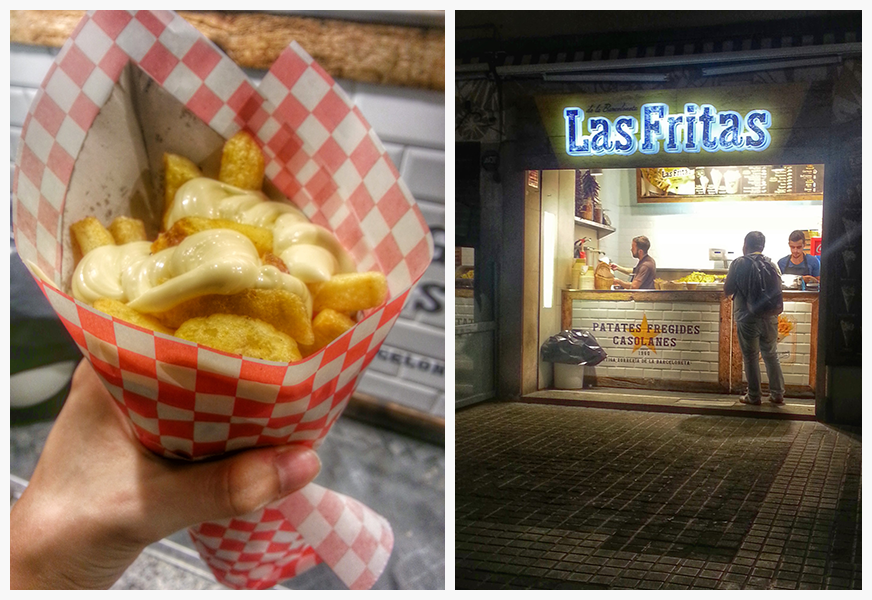 At Ocaña I ordered a Red Hot Chili Pepper cocktail to drink. The ingredients included ginger beer and tequila (they had me at ginger beer). For dinner I ordered a chicken salad; lettuce had been severely missing from my diet the past few days, so I was excited for some greens! 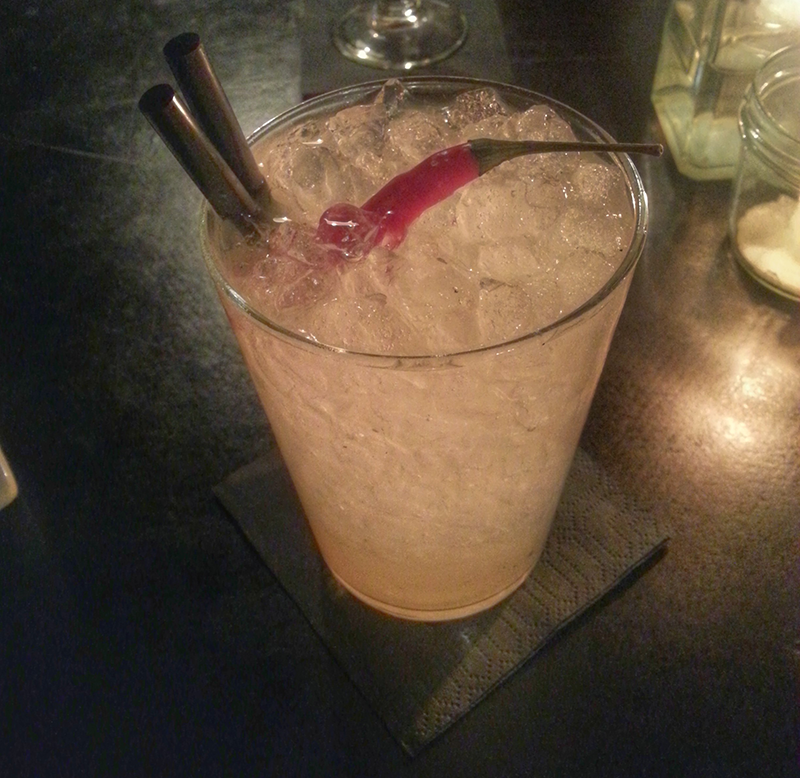 After dinner we made our final stop for drinks while in Barcelona. Lauren insisted that we needed to try Licor 43 before we left, so we each got a glass to nurse. It was quite tasty! A very sweet liquor, with notes of citrus and vanilla.

The restaurant/bar we stopped in was snail themed: 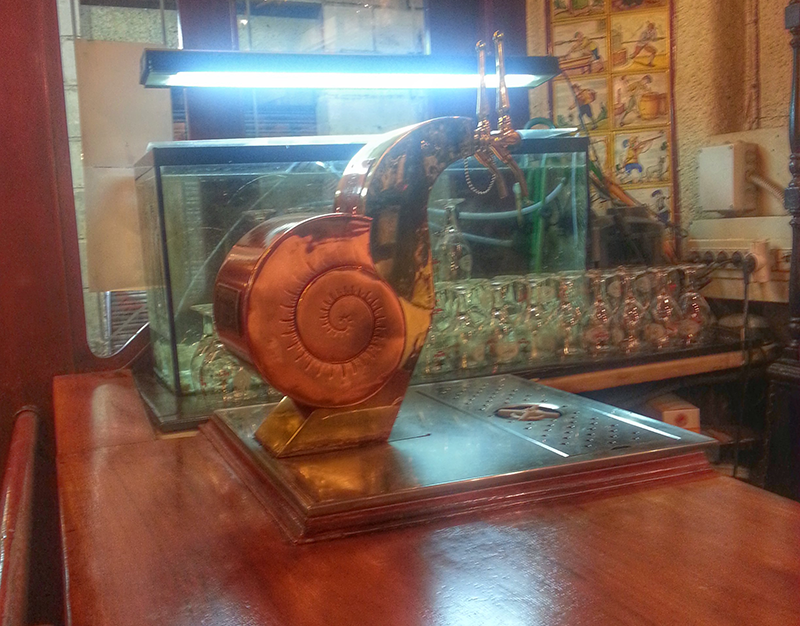 Our final day in Barcelona was so fun, especially since we’d become more familiar with the area by that point. I’m so glad we split up our time in Spain/Italy the way we did because it gave us more time to get to know each city instead of rushing around trying to see as many sights as possible. We definitely didn’t come even close to seeing all that Barcelona has to offer, but we did get a pretty good mix of everything. Someday I hope to go back and actually see the finished Sagrada. :)

The next day (Tuesday) we were off to Italy!