This was my very first trip to Europe, and while I was crazy excited about it, I also didn’t know exactly what to expect while traveling abroad. I ended up having an amazing vacation, and through the next couple of blog posts, I’ll be recapping some of my favorite parts of the trip. I traveled with my boyfriend, Aaron, and once we got to Spain, we also met up with his sister, Lauren.

Three weeks ago today we had just started our traveling adventure and were arriving in Barcelona, Spain. 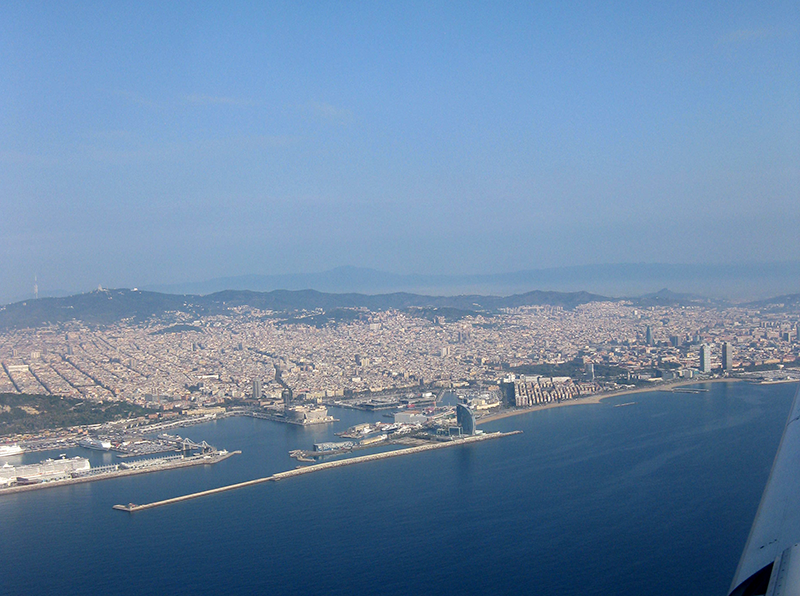 I snapped the photo above from the plane as we descended. (How incredible is that view? We flew into Barcelona from the north, and the pilot looped us around the eastern side of the city before turning back toward the airport to land, so we had plenty of time to oo and ahh over it!)

While we were in both Barcelona and Florence, we stayed in apartments through Airbnb, which is a service that lets you connect with people in the area who rent out their homes or properties. Has anyone else ever tried it? Overall it worked out great for us (aside from the fishy smell radiating from the fridge every time we opened it, which became almost unbearable by the end of our stay, but we’ll just try to forget about that part…). Split two or three ways the cost was better than most hotels and the location couldn’t be beat! See below: 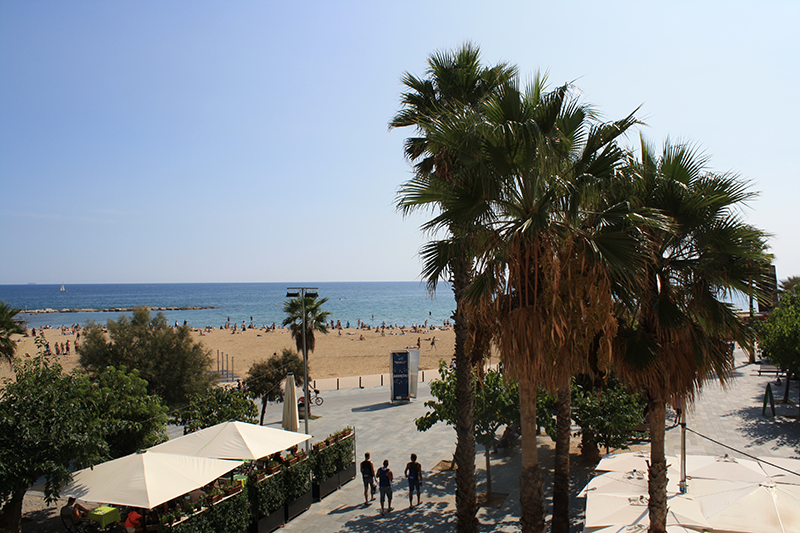 The apartment was in La Barceloneta, a neighborhood right on the Mediterranean coast. The photo above was taken out our apartment window!

Most of our first day in Spain was a lesson in recovering from jet lag. We left Chicago at 4PM, arrived in Dublin at 4AM local time, and were in front of our apartment before 11AM. However, that meant a whole night’s sleep was pretty much lost (my attempt to sleep on the plane was mostly a bust), so it’s fair to say we were running on fumes by that point. Hence, we took our first real Spanish siesta. :)

We did manage to recover enough that first day to search out some yummy noms for dinner, and we ended up at Bilbao Berria, a tapas restaurant. The setup was buffet-style; a counter is lined with small dishes, and you take as many as you’d like. Each plate has a stick, and at the end of the meal your bill is determined by how many sticks you have. I loved how this worked! No pressure to eat too much like I normally feel when I’m at a buffet, and there’s no waiting for someone to serve you either. My favorite tapa was served on a piece of bread with an apple slice, goat cheese, and a caramelized sauce. Sweet and savory, my favorite! 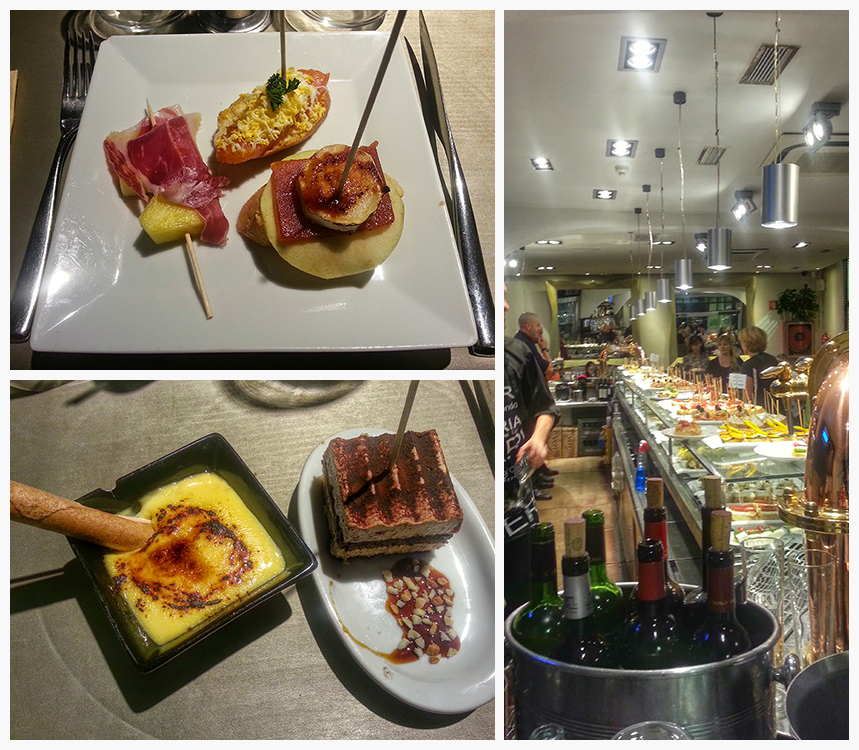 Can I just say that I love love love the architecture in Barcelona? The Gothic-style buildings are so beautiful. The Gothic Quarter was about a 20 minute walk from our apartment, so we spent a lot of time meandering through the ancient streets (also, walking: did I mention yet how much of this we did??). I never did quite get used to the fact that these crazy old buildings are just a typical part of the landscape there. You just don’t see anything quite like that in the US!

The building on the left below is the Catedral de Barcelona, and on the right is a peek down a street near where we stayed. Almost every balcony was adorned with clothing/towels/flags/etc, so the streets were quite colorful! 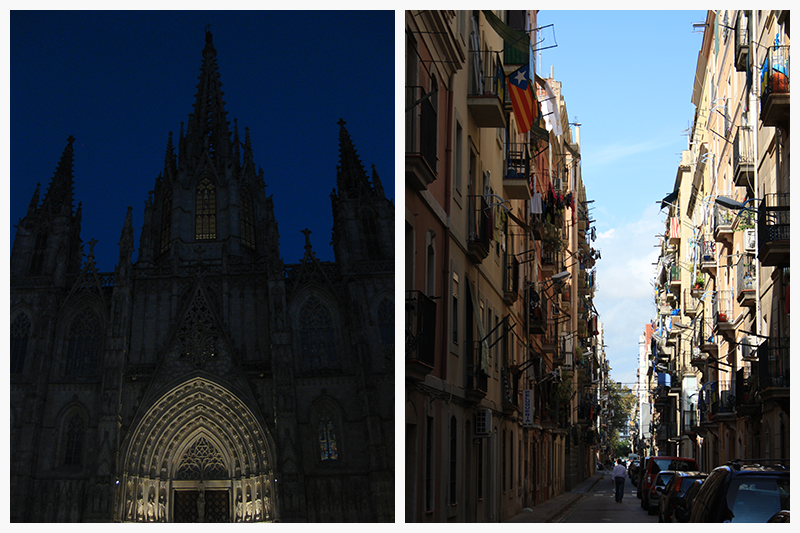 Day two in Barcelona started off with a run down the beach, followed by a mini bootcamp session (led by yours truly). Side note: I had such good intentions for dedicated workouts while we were traveling, but it was harder after we left Spain and weren’t right on the beach anymore to find a good place to do it. Luckily we walked up and down and around all over the place so much that I ended up being okay with that. As Rick Steves explained in his guidebook to Florence, by the end of his walks around the Renaissance city, he has the buns of David! 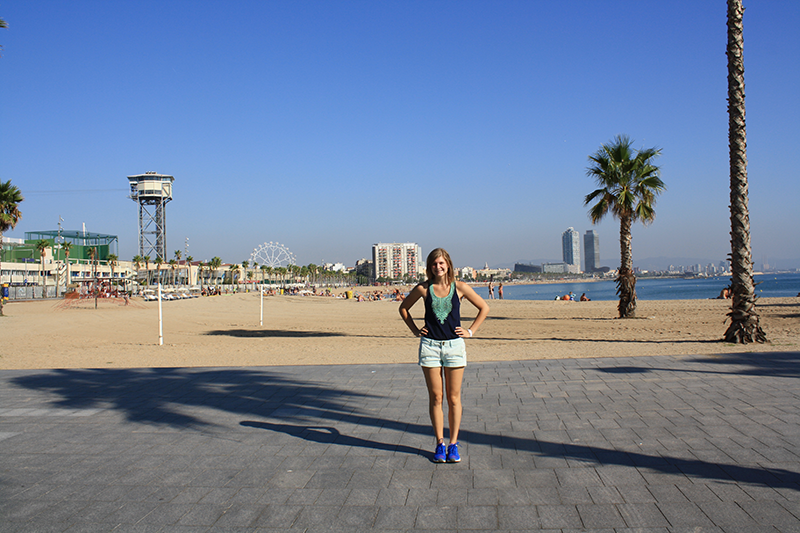 This first full day started off feeling like an experiment in tourist failure. We’d of course been planning the overall details of the trip for several months: when to leave and arrive, what flight to take, where to stay… but we never really planned out too many of the details, preferring to “wing it.” While in general everything worked out in the end (and I did appreciate not having a set schedule that we had to follow), I do wish that we had planned better for the attractions we did want to see. Case in point: the Sagrada Familia. We arrived there, sans tickets or a reservation, on a Saturday at noon, to find out that we wouldn’t be able to get in for several hours. Well that just wasn’t happening, so we vowed to purchase tickets for a later date once we got back home, and instead set off for Park Güell via the Metro.

Another side note on transportation: though we did take a cab from the airport when we first got to Barcelona, we took the Metro (subway) or walked everywhere else while we were there.

Sagrada Familia (which is a massively beautiful, still unfinished church in Barcelona–and which we did eventually get to visit) and Park Güell are both the brain children of designer/architect Antoni Gaudí. While some of the architectural aspects of Park Güell are blocked off only to paying visitors (that was fail number two of the day–we once again arrived without tickets and didn’t want to wait), we were still able to freely wander around most of the gardens without a ticket. 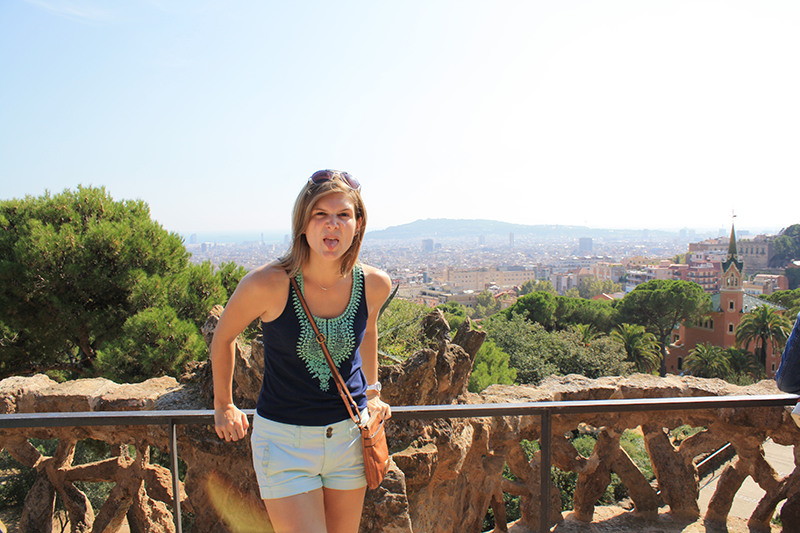 On the highest point of the park there’s a large cross built into a stone base that you can climb up. It gave us the most incredible view of the city:

After treking around Park Güell for a couple hours, we wandered into this nearby restaurant for our first sangria of the trip. YUM! Love how acceptable it is to have a drink pretty much any time of the day in Europe. :P

We made a pit stop at home for a rest after the day, and then headed out again for dinner at Cuines Santa Caterina, located in the Mercat de Santa Caterina (where we had also stopped for breakfast that morning). We ordered a bottle of wine, and I had these delicious pork wings. They also came with a pile of small tortilla shells; I wasn’t entirely sure what I was supposed to do with them, but piling them with the pork, onions, and bbq sauce ended up being a pretty good call. 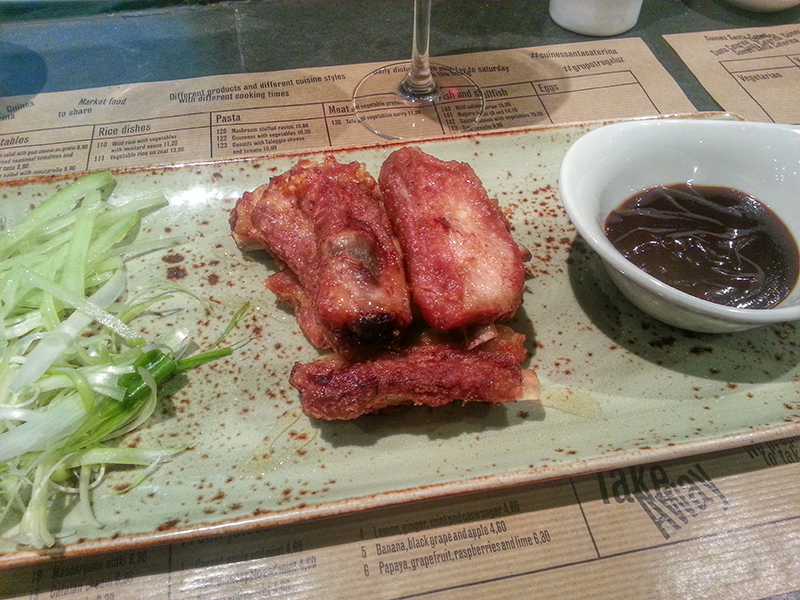 We rounded up the night at Cal Brut, a local bar nearby, where we stayed till closing time and made friends with the owner/bartender, Marc. I tried this cerveza (aka beer) from Ibiza, which I loved. It was nice and light and fruity, which was perfect for a warm night in Barcelona. Followed by a couple rounds of gin and lemonade. :) 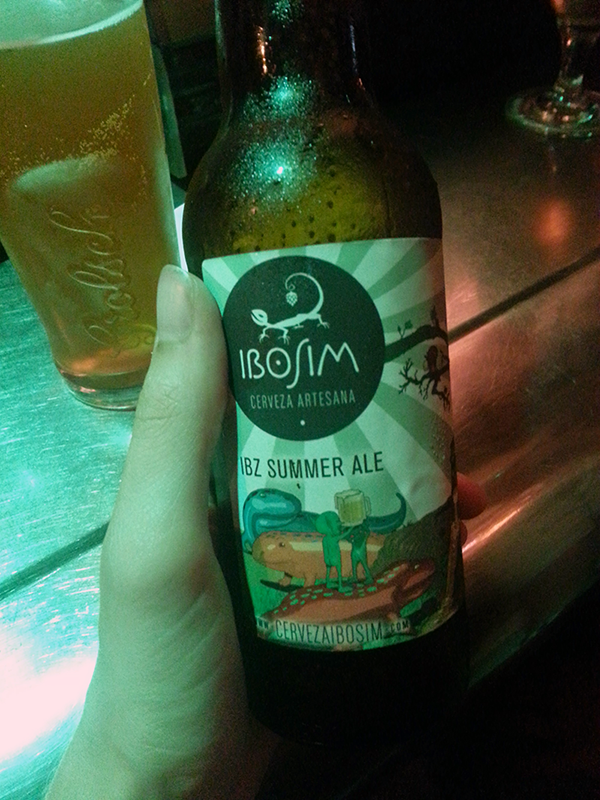 Thanks to our bartender friend Marc, I would now like to forever refer to IPAs as “Eepas”.

Stay tuned for more on our trip to Barcelona, and then our hop across the Mediterranean to Italy!