Mmm, bacon. I’m pretty much sold on anything if it’s got the word bacon in it, ya know? 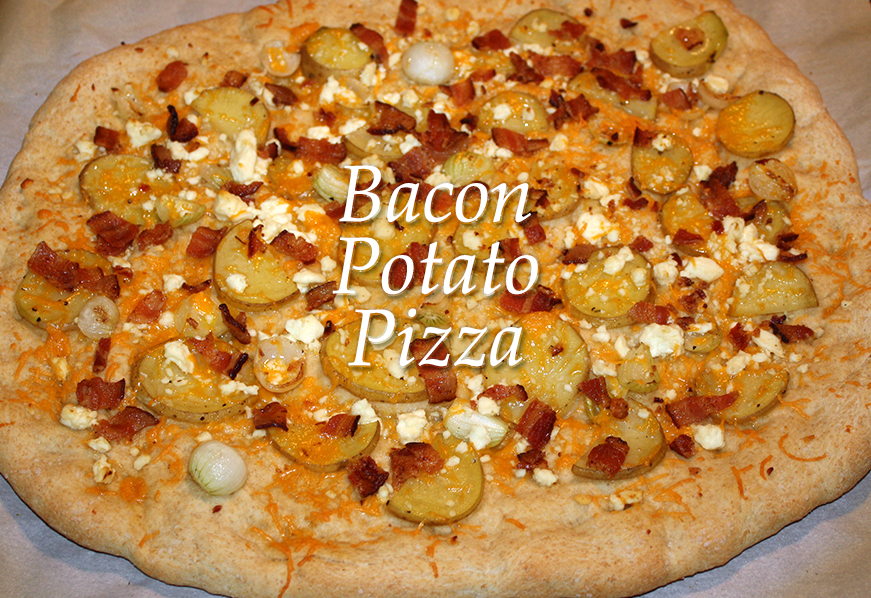 This tasty topping combination was inspired by our recent visit to Cento, an Italian restaurant in downtown Madison. The pizza I ordered featured crumbled bacon, sliced potatoes, pearl onions, and mozzarella on a tomato sauce base. I loved the bacon and potato concept but wanted to try something with a different base and cheeses.

I decided to replace the tomato with olive oil, and the mozzarella with feta and cheddar cheese. The flavors of the feta and sharp cheddar (Hook’s 5 Year Cheddar for the win!) complement the potatoes and onions nicely, and the olive oil base makes the  all the other toppings shine. For the sake of full disclosure, I miiiight have added a generous helping of more cheese when I reheated it for leftovers later. Don’t judge, mmkay?

For the dough, you could either use a pre-made crust or one you whip together yourself. Personally I love making my own dough, and this quick and easy recipe from Mel’s Kitchen Cafe is one of my favorites (especially if I’ve decided all spur-of-the-moment-like that I must have pizza for dinner). I usually use about half and half whole wheat to white flour, but you can modify to your tastes.

Steps:
1. Preheat the oven to 475°. If you have a pizza stone, place that in the oven now. Otherwise, you can stick a large cookie sheet in the oven for the same purpose (more on how to bake the perfect pizza here).
2. Prepare your bacon slices. I cooked mine on an electric skillet, but you can also lay the separated bacon slices out on a foil-lined baking sheet and bake in the oven for 8-10 minutes. Keep an eye on it so it doesn’t burn! After cooked, blot with a paper towel to remove some of the grease and set aside to cool. Once cool, chop into small pieces.
3. Next, thinly slice your potatoes. You could also peel them first, but I chose not to. Sprinkle with salt and pepper to taste.
4. Peel and cut the pearl onions into halves or quarters (I did a combo of both).
5. In a large skillet over medium heat, heat 1 tsp of olive oil. Place onions and potatoes in the pan, and cook until softened and starting to become slightly transparent. Stir and move the onions and potatoes around as needed. When done, remove from heat. My potatoes cooked more quickly than the onions, so I removed them to a bowl before the onions were done.
6. On a large piece of parchment paper, roll out your pizza dough to desired thickness.
7. With a pastry brush (or clean fingers work too), spread out 1 tbsp of olive oil all over the pizza and crust. Sprinkle salt over the very outer edges of the crust.
8. Layer your other ingredients over the oil base: potato slices, onions, and bacon, then evenly sprinkle feta and shredded cheddar over the whole pie.
9. When the oven is preheated (it’s good to have the stone preheat for an hour before cooking, but sometimes I just can’t wait that long), transfer pizza on the parchment paper onto your preheated stone or baking sheet. Bake for 10-12 minutes or until crust is lightly golden brown and cheese is melted.
10. Carefully remove from oven and allow to cool for 5 minutes before slicing. 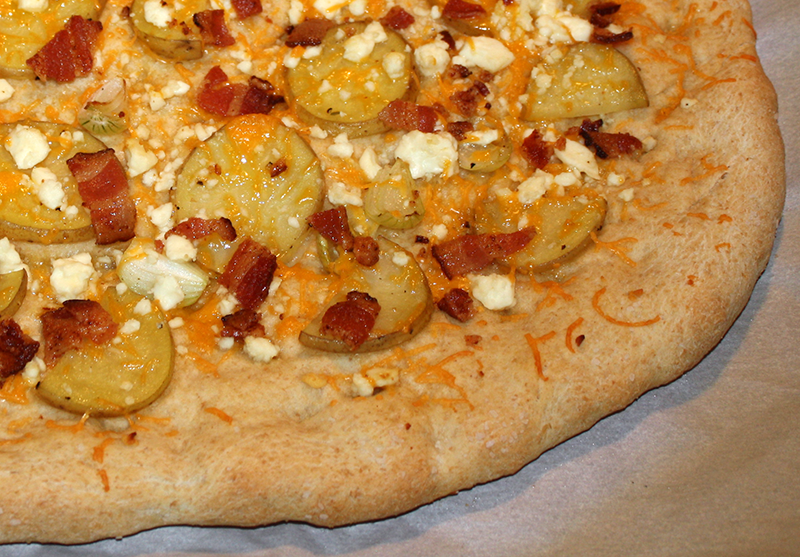 (Do the potatoes look like pickles to anyone else?)

One Response to “Bacon Potato Pizza”